In Black and White on Wall Street, Joseph Jett describes the combative environment of a Wall Street trading floor, where the driving forces are greed and competition, whatever the cost. For Jett, the price was his career, his reputation and the distinction of being a Wall Street pariah. Like James Stewart’s Den of Thieves, Black and White on Wall Street reveals not only the excitement of the game but the Street’s own brand of corruption as well. Its power-hungry, wildly rich players have their own set of rules, and though Jett got caught in the crossfire, he isn’t going down quietly.

In 1994, Joseph Jett found himself at the center of one of the biggest Wall Street stories of the decade. Black and White on Wall Street reveals how, just months after naming him “Man of the Year” for heading a phenomenally successful bond-trading team, Kidder, Peabody Co. accused him of recording $350 million in phony profits and taking more than $8 million in bogus bonuses. 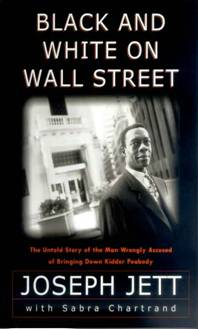 Black And White On Wall Street

Jett was forced out of his job and charged with masterminding one of Wall Street’s largest securities scams in a scandal athat was played out in newspaper headlines and television broadcasts for months. Jett’s career was crushed in an onslaught of accusations from one of the most powerful corporations in America, Kidder’s parent company, General Electric. His family, his childhood and his personal life became fodder for countless lurid media stories.

Black and White on Wall Street is the story of how Joseph Jett has fought to clear his name, and now, for the first time, he tells his own story, a story replete with the breathless pace of Greed and Glory on Wall Street and the riveting detail of Barbarians at the Gate. At the heart of Kidder’s accusations were claims that Jett was a “rogue trader” who had acted entirely alone. In this book, Jett shows that his managers were fully aware of his trading strategy and, in fact, approved of it. Yet Kidder systematically made Jett a scapegoat for the firm’s internal failures, which ultimately forced General Electric to sell Kidder to Paine Webber to avoid further losses. But by then Jett was unemployed, his assets were frozen and his name was synonymous with Wall Street fraud.

Joseph Jett reveals that in the Kidder power wars and the scramble to lay blame, racism was a tool often wielded against him as one of a mere handful of senior black traders working on overwhelmingly white Wall Street. He describes near-constant manipulation of his careeer and accusations against him that hinged on a surreal fear of his contact with white women at Kidder. He tells of a universe gone morally awry, run by old-world standards that exclude anyone who differs from the status quo. Jett also walks readers through the investigations, arbitration panel and hearings that delved into the scandal, demonstrating his innocence and showing how the SEC, the National Association of Securities Dealers and the Justice Department all dismissed Kidder’s and GE’s charges of fraud.

Ultimately, Black and White on Wall Street is the thrilling story of what happens when a high-risk Wall Street trading strategy goes sour and how one man, blamed for it all, coped with the fallout of greed, racism and character assassination. This story of financial intrigue and stunning personal pathos is a compulsive read.

Make sure you visit on YouTube the video discussion of Joseph Jett on Affirmative Action and visit our business site, Jett Capital Management LLC and be sure to visit the Official Blog of Joseph Jett