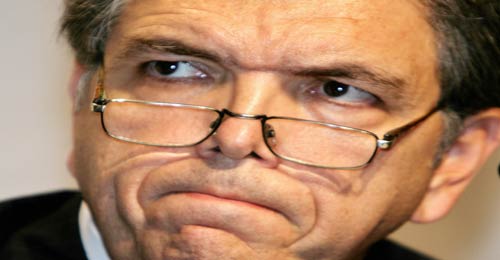 Investment bank executives criminally and specifically targeted the poor and middle class for financial rape and exploitation of hope. It was done through a particularly pernicious scheme that took full advantage of the fall of Glass-Steagall that once protected the common man from the machinations of Wall Street high finance. It struck home for all of us as it was that quintessential element of the American Dream, home ownership, that the Citibanks, Bank of Americas and their ilk exploited. The act of reckless creation of subprime debt was criminal because the intent of the act was ever criminal. And it is an act destined to be played out again and again unless Obama’s Mortgage Fraud Task Force  brings criminal indictments against the high level Wall Street Executives responsible.

To understand the criminality of the subprime debt market we need only understand why it was that Citibank, under the direction of its leaders including former CEO Chuck Prince would swing to producing and financing subprime debt such that it represented an astounding 56% of all Citibank mortgage origination. Citibank engaged in criminal mortgage fraud for one reason only:  greed.

A trader always seeks the Difference Engine:  that potential for arbitrage wherein a security or commodity has a greater intrinsic value in one market than in another. Our domestic mortgage debt had long benefitted from a credit arbitrage that gave AAA-ratings to debt that was securitized and packaged into derivative instruments and then sold to overseas Special Purpose Vehicles (SPV) that also held preferential tax treatment. However, it took the criminal collusion of the credit rating agencies to continue these preposterous credit valuations long after the handwriting for pending disaster was indelibly etched on the walls as vast amounts of subprime debt was transmogrified into AAA-rated derivative instruments.

Obviously, it is cheaper for a bank to produce subprime debt where no costly credit analysis of the purchaser is done at all. It is an inescapable logic, if you are lacking in forethought or simply don’t care that flooding a market with subprime debt for your own greedy purposes will ultimately spell disaster. Indeed, it appears that driven by greed, Citibank quickly concluded why bother producing expensive vetted mortgages when the Difference Engine meant low cost subprime would be given near equivalent valuation if masked within a mortgage derivative instrument. And so we see subprime debt rise to dominate Citibank’s issuance. But surely, if responsible managers create and condone a corporate culture where people are told to not perform due diligence and to dispense with all fiduciary responsibility because doing no work begets greater profit than performing due diligence then this must be held as criminality and the managers brought to justice.

This mortgage fraud that would become the Global Financial Crisis should and ought to have been avoided entirely. There had been laws and regulations in place that would have stopped the debacle from ever occuring.

As there is an order of rank among man, so too there was an order of rank in the banking world. Its line of demarcation was called Glass-Steagall which protected the common man’s banking institutions from playing in waters too deep for the collective intellect of their employees. The law worked wonderfully well for over half a century.

Graduates of highly rated colleges and MBA programs were paid top dollar and went into Investment banking where, under apprentice type training, they learned the craft and art of banking. Those from second tier schools went to the commercial banks and originated mortgages and financed automobiles and small business.

These former commercial banks are the ones who did not know when to quit and who had the advantage over the historic Investment Banks of mortgage origination. This is what they sought to exploit. They had direct access to the common man’s wallet which collectively dwarfed the resources available to the traditional Investment Banks who dealt nearly exclusively with high net worth clients. Merrill Lynch would purchase CountryWide in its pursuit of direct access to mortgage origination and mortgage fraud.

A small amount of subprime debt bled into a derivative instrument was a bit of spice that elevated returns in the early days of the collateralized debt obligation market.  Commercial banks such as Citibank were like the vampire that sucks the last drop of blood from the last human left on earth and then woke in wonder of its hunger. Citibank with malice aforethought pushed the mortgage brokers it financed as well as its own employees to exploit the poor, the middle class and the hopeful to produce subprime debt whose only purpose was to drive Citibank’s Difference Engine and line the pockets of its executives while leaving the common man, ultimately, with devastated lives.

Instead of punishment for mortgage fraud, the Federal Government was forced to bail out the entire banking industry. President Bush was savvy enough to know that commitment to free markets must take a back seat to the financial survival of the banking industry and so Bernanke took the needed measures.

President Obama realized that punishment needed to wait for the banking industries return to health but hopefully all understand that civil litigations are meaningless to stop or prevent future fraud.

President Obama’s Financial Fraud Enforcement Task Force yesterday filed a civil lawsuit against Bank of America Corporation and certain of its affiliates, including Merrill Lynch. The complaint alleges that Bank of America lied to investors about the relative riskiness of the mortgage loans backing the residential mortgage-backed securities (RMBS), made false statements after intentionally not performing proper due diligence and filled the securitization with a disproportionate amount of risky mortgages originated through third party mortgage brokers.

These are again civil charges that will not change the mindset of Wall Street one iota. It seems that the massive donations from Wall Street to both political parties yet holds in abeyance any real application of justice for when one reads the following it is unclear how criminality does not obtain. The investment banks have long owned the Securities and Exchange Commission. The question is: Do they own the Justice Department as well?

Second, Bank of America did not conduct any loan-level due diligence at the time of securitization.  According to the complaint, this was a violation of Bank of America’s own policies, procedures and prior practice, and was contrary to industry standards and investor expectations.  Moreover, this decision allowed Bank of America to keep bad loans in the deal. According to the complaint, these bad loans had a range of glaring origination problems, such as overstated income, fake employment, inflated appraisals, wrong loan-to-value ratios, undisclosed debt, occupancy misrepresentation, mortgage fraud and other red flags wholly inconsistent with a purportedly prime securitization. As a result of this lack of due diligence, Bank of America had no basis to make many of the representations it made in the offering documents regarding the credit quality of the underlying mortgages.

The report details the statements of hundreds of employees astounded by the actions of their superiors. Let us hope that the Obama administration finds courage to set the financial markets on firmer ground by holding executives not peons responsible for the Global Financial Crisis.